The Art of Planetary Science

This is a long overdue post, considering The Art of Planetary Science (TAPS) is what started me down this whole sciart path. I started this art show in graduate school at the University of Arizona’s Lunar and Planetary Laboratory, along with my co-founder James Keane (James is also a scientist and artist, and all around great person). These art exhibitions celebrate the beauty and elegance of science by featuring artwork created by scientists out of research data, or containing scientific information or ideas, along works by artists that are inspired by planetary science, the solar system, astronomy, and related fields. By displaying both types are art alongside each other, it offers a more multifaceted perspective on science, and facilitates communication between sectors of the community that don’t often overlap. Our shows serve as a source of inspiration, and a space to reflect on the role of science and exploration in society.

(The artwork featured in the linked image was by Spencer Edgerton. There are too many other artists to name in the photos below, but if you’d like to know get in touch!)

You can view photos from past TAPS events here.

As planetary scientists, our research focuses on some of the most beautiful and awe-inspiring things in the universe, and yet as scientists, we don’t often take the opportunity to express this to others. Often, the beauty we see every day in our work is obscured in equations, numbers, and graphs. When I create a plot from my research analysis, it may only look like a bunch of dots and lines to most people. To me, however, it’s beautiful because it has context, and meaning, and implications for the way that we understand the universe. Because in that plot I see the elegance and complexity of physics, the geologic history of other worlds, the elaborate dance of planetary motion, and the chemistry that allows for the existence of life – and I want desperately to share that with other people.

So, I went to my department head in grad school and told him I wanted to put on an art show. He looked somewhat puzzled, but gave me a few hundred dollars from the outreach fund and I never looked back. Years later, he told me that at the time, he didn’t think it was going to work but felt bad discouraging what was obviously a very genuine interest and effort. We laugh about this now- honestly, I wasn’t sure it was going to work either! But, like most “new” ideas, I wasn’t the first one to try putting art and science together, and the response TAPS has gotten from both the science and art communities has been overwhelming. 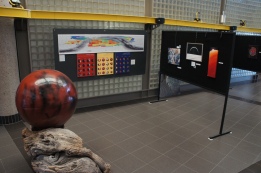 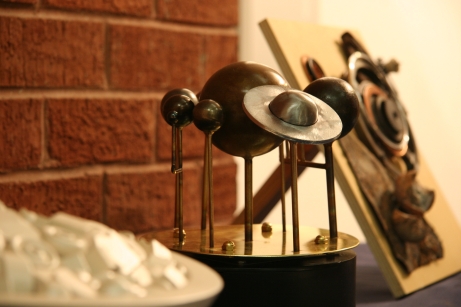 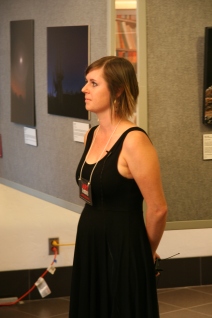 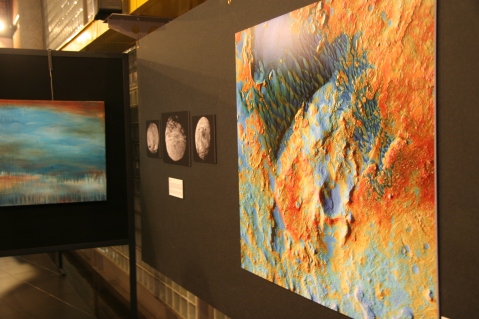 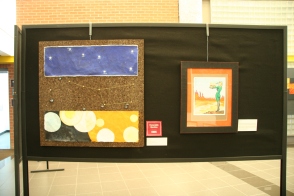 The effort has been hugely successful! To date, we’ve done 9 exhibitions over 5 years, including our main (sort of) annual show in Tucson and satellite events at scientific conferences across the country. At our main shows, we typically display >200 pieces of art from artists all over the country and world, and see several hundred guests over the course of the weekend long event. The shows at conferences are smaller, but allow us to reach more geographical communities. I’ve had the pleasure of working with (and learning from) hundreds of artists, and seeing sciart trickle out through the planetary science community and beyond. I’ve been able to engage people that otherwise wouldn’t know we have spacecrafts all over the solar system. I’ve met other sci-artists, including a large and diverse community focused in other scientific fields. Overall, my experience with TAPS has been eye-opening, positive, and deeply touching. I couldn’t have done all of this without my cofounders and organizers: James Keane, Sarah Peacock, and Hannah Tanquary. They all have their own projects these days, so most smaller shows I run on my own now. But the main show in Tucson has been handed down to the current graduate students at the Luanr and Planetary Lab. Last week I was contacted for advice by a woman who wants to run a sciart show at her human origins conference, and I had two other similar inquiries earlier in the year – the effort is spreading and I love it. 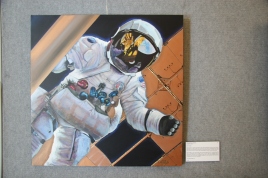 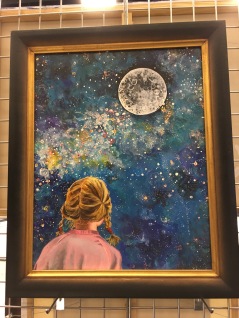 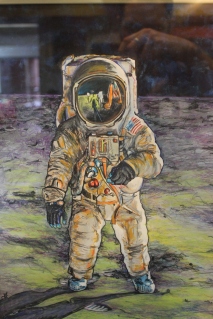 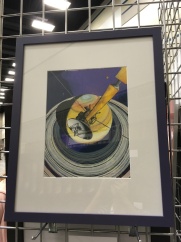 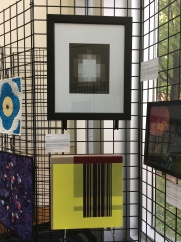 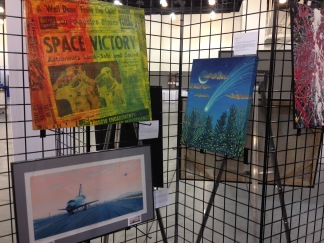 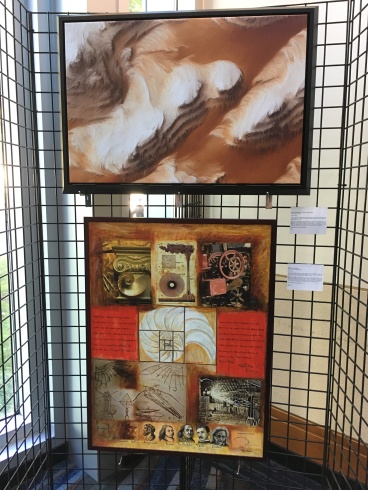 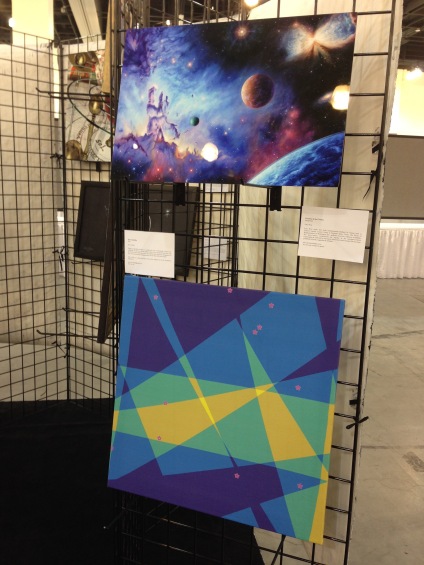 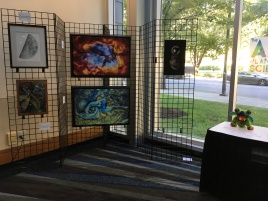 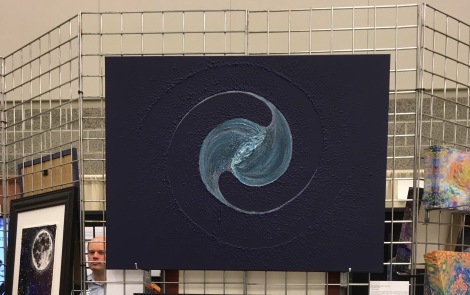 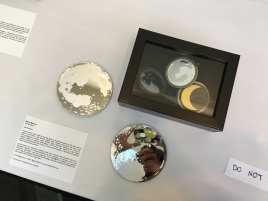 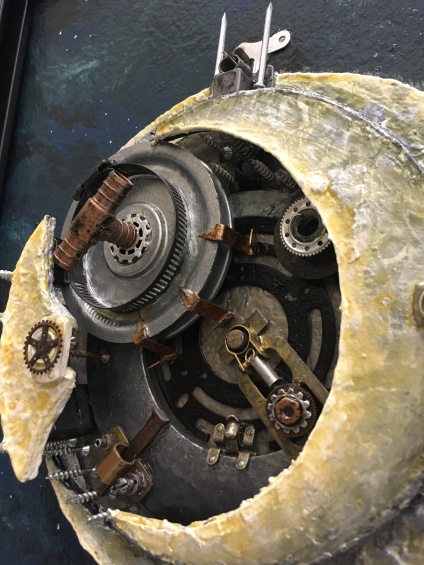 Every time I finish an art show, I think to myself, that was really fun but I’m exhausted, sore, and it takes so much of my free time that I really should take a break. Yet, every time someone asks me to organize one, it’s really hard to say no (I have not succeeded yet). I’ve spent a lot of time over the years thinking about not just why I enjoy doing it, but actually why I think the work is really important. A couple weeks ago, I did a show at the Division for Planetary Sciences conference, hosted this year in Knoxville, TN. One of the artists told me that she was so excited to participate because she had been criticized before for making art about space. Can you believe that?! It blew my mind, and it broke my heart a little bit. But she had founds us, and that same week I got to teach people about orbital dynamics using my Planetary Music Box, and I learned about eclipses and dragons in Chinese folklore. Separate from the art show, there was also a reading of a play about Caroline Herschel, a female astronomer from the early 1800s. See, it’s a scientist’s job to create knowledge and an artist’s job to create self-expression, and it turns out that bringing these two concepts (and groups of people) together has allowed us to build a really powerful tool for scientific engagement and positive social change. I recently put in a book proposal in which I tried to articulate the philosophy behind TAPS and the power of this tool – the role that science and data driven art can play in society:

First, outreach is important in planetary science both to promote general education and to garner public support, as space exploration is primarily federally funded through NASA. We want to make people aware of our work, of the worlds we are exploring, and the knowledge we are creating. We want to share what inspires us about the solar system. To this end, we host outreach events where we engage with the public and try to convey that inspiration to others. These types of events are very successful at getting the public excited about space exploration! Unfortunately, it is much more challenging to get people excited about the science that drives that exploration, and we often fail to communicate the details and implications of our research effectively to the greater community. Part of this challenge comes down to the fact that science is something many people feel they do not relate to, and believe is beyond their ability to comprehend. This belief is often ingrained at a young age by the reinforcement of implicit biases and societal misconceptions about inherent versus learned abilities needed to succeed in STEM fields, and the lack of exposure to scientists as “real people” and role models. This problem is exacerbated by the fact that most scientific research is only communicated to other scientists, and interesting discoveries that are made are often obscured in boring or confusing figures published in technical journals. As long as people believe that science is beyond their ability to understand, they will feel alienated by it, and that alienation has profound impacts on our society as a whole. We live in a time where now, more than ever, it’s critical to increase scientific literacy in society and restore the public’s trust in science and scientists. The Art of Planetary Science was created to directly address this issue. By exhibiting artwork created from scientific data, we provide the opportunity for people to form a meaningful, personal connection to science in a way that doesn’t require them to “understand” it. There are no classrooms, no rules, and no tests at the end. The experience is solely between an individual and the art. It’s not important if they fully understand the data or concept that is being represented. All that matters is that personal connection, which, over time, can change the way people think and feel about science in a fundamental way. This has implications for things like how they vote, lifestyle decisions they make, and their ability to critically analyze information. This has implications for the way that society grows as a result of the creation of scientific knowledge. 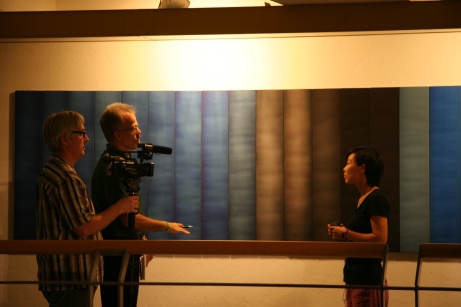 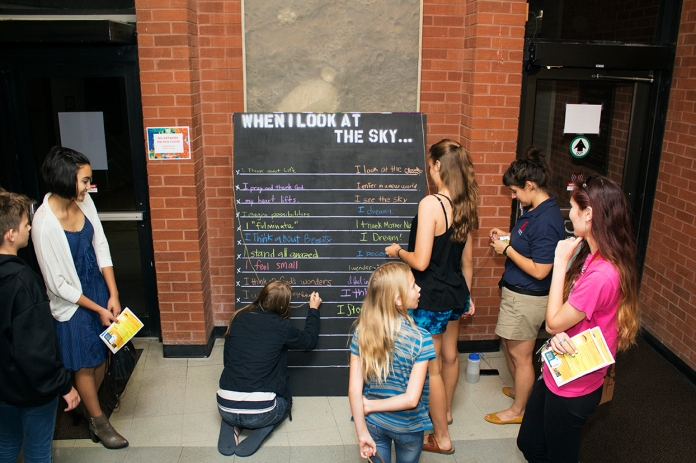 Asking people to create artwork for TAPS exhibitions gets to our secondary goal. As scientists, we often ask the public to engage in what we believe is inspiring and meaningful, as if by virtue of the fact that this is our profession we can define this for all people. However, it’s critical that we turn this around and, instead, look at our own work from other people’s point of view. A great work of art means many different things to many different people, and while the interpretation of scientific data may be somewhat more objective than a painting, limitations should never be applied to people’s imagination or sense of wonder over what that data could represent for humanity. Inviting people to create science-focused artwork serves not only to make us more effective communicators, it also gives the public an opportunity to show us what inspires them about our work, and to participate in defining how and why society values and benefits from scientific knowledge. It helps to erode the ivory tower. To this end, inclusion is a core tenet of our philosophy, and all people, regardless of artistic background, level of training, or age, are encouraged to participate in our events. In an age so strongly characterized by society’s relationship with information and technology, the changing climate, and the burgeoning private space industry, this conversation has never been more important to have and all people should be a part of it. 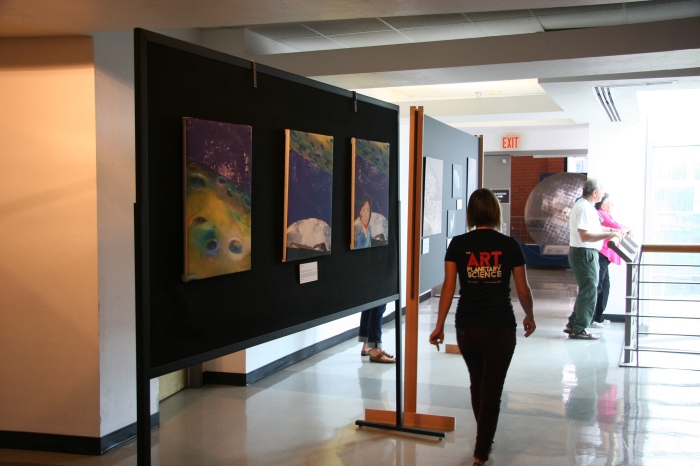 I still have so many other things I’d like to talk about, like parallels between the process of creating art and creating knowledge, how their subject matters and frames of reference relate, and how each is a form of exploration. But, I’ve run out of steam tonight so this will have to wait for a future post. Till next time.

postscript: During one show at the University of Arizona, we worked with an art class to organize “art interventions,” interactive and collaborative art projects that attendees could participate in during the exhibition. These (very popular) projects brought a new level of engagement to the art show by allowing attendees to also become artists. One group created paper tiles to color, which when put together created colorful mosaics depicting visual representations of scientific equations. Another group built a chalkboard which simply had a fill in the blank statement: “When I look at the sky, …” A third group interviewed people about what inspired them about art and science and created this video. I think it gets across a lot of why we (as scientists) do what we do, and I’ll admit that sometimes watching it makes me (as a TAPS organizer) tear up. It’s ~20 minutes, but worth a watch sometime.